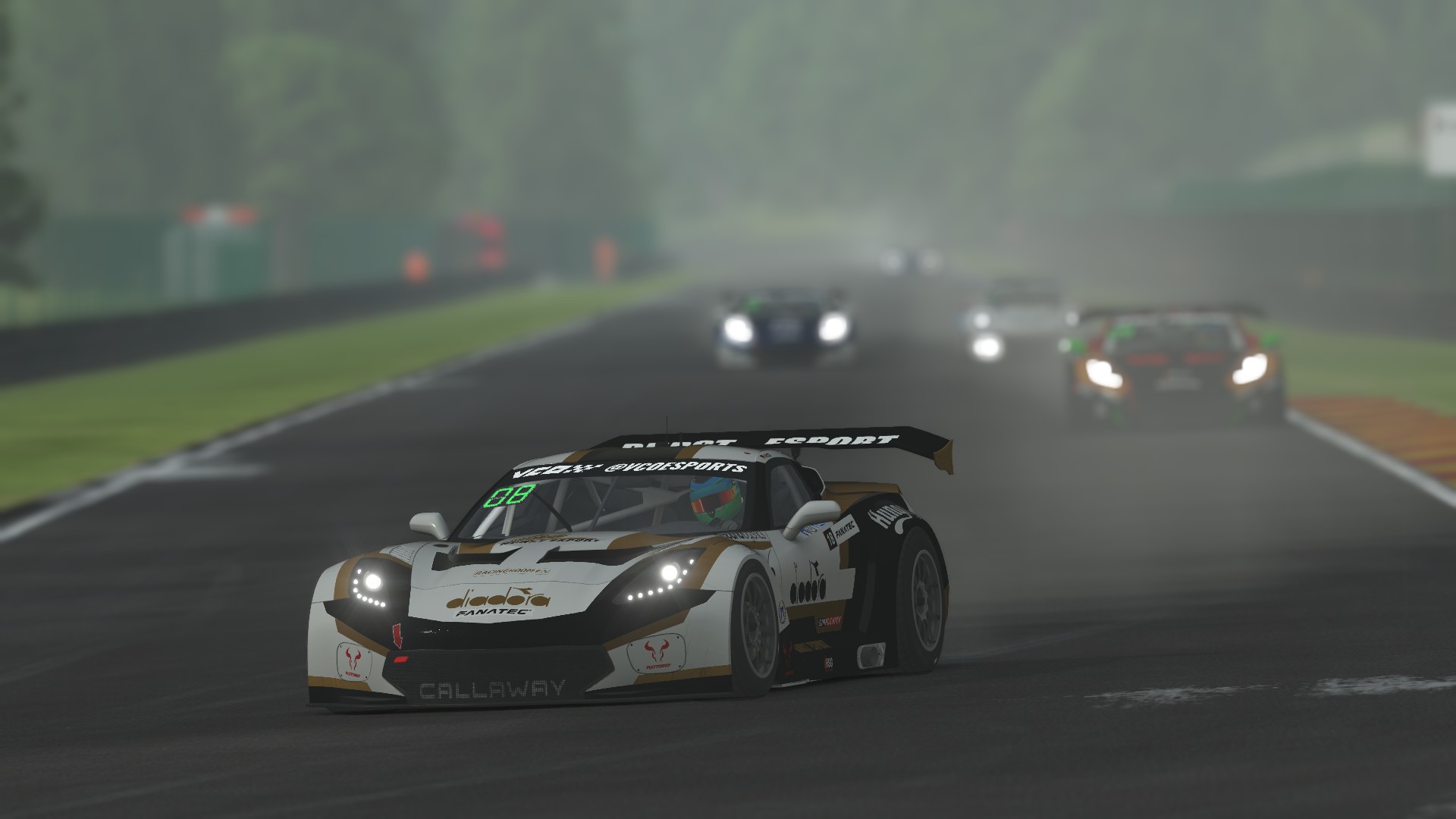 The time has come for our final race review of 2020. The season finale of GT PRO by čiččič at Spa Francorchamps was a rainy conclusion, to an eventful second season of the series.
Jernej Simončič, Michi Hoyer and Robin Pansar were once again representing in the Burst Esport car, with the Slovenian championship contender qualifying himself in 5th position with Michi and Robin in P16 and P24.

The 15 minutes long sprint race was dry from start to finish, but everyone was struggling with dirty on several parts of the track, which made overtaking a bit harder than usual. Jernej finished in 6th after a fairly quiet race from his side, while Michi put in a brilliant drive to finish in 11th after starting 16th. Robin sadly had to retire the car.

The final race of the season was, of course, the 45 minutes long feature race with Jernej starting again starting from 5th due to the reserved grid start of the top 10 finishers from the sprint race. Robin was a man on a mission starting from the back in 28th place while Michi started from the 11th place he finished in earlier.

Michi got spun into turn one, which put him last but he refused to give up there, more on that later. Robin didn’t take any risk at the start, but on lap two he gained ten positions due to a massive crash on top of raidillon, and with quick reactions, he avoided the cars that were involved and those that were going slow in order to not get damaged, brilliant racecraft from the Swedish driver and engineer!

Jernej again had a quiet race. That was until the sky got darker and the rain hit the legendary track in the Ardenne forest. Him and Michi, who had fought his way from last and back up to 12th decided to go one lap further before pitting for wet tires. Michi gained a position by staying out, while Jernej dropped all the way down to 19th because he had a shared pit box with another car, so he had to wait for him to serve his pitstop before he could himself.

Let’s get back to Michi’s recovery drive because as mentioned earlier, he got spun at the start of the race, but with incredible pace and great strategy call, he went from last to finish in 8th place. A monster of a drive from the german who really has stepped up to a new level in 2020.
After the pitstop disaster, Jernej did recover to P15, but the championship fight was over, so not the day he would have hoped. Robin put in a great drive as well by finishing 17th after starting last.

All of this means that Jernej finishes 4th in the championship standings with Michi ending up in 14th and Robin in 27th place. We are ready for season 3 of GT PRO in 2021 and improve from this one.