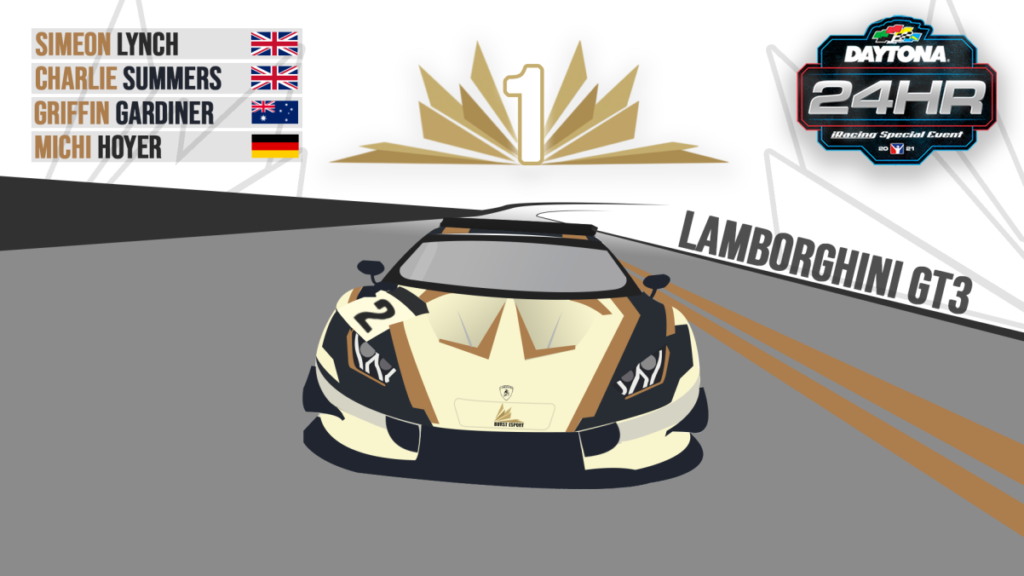 Saturday last week marked the start of the 2021 season of special events on iRacing with the 24 Hours of Daytona.

After last years disappointing result, we were determined to make up for it and for that, we put Charlie Summers, Simeon Lynch, Griffin Gardiner and Michi Hoyer in a Lamborghini Huracan GT3, and ohh boy did they deliver!

Simeon qualified us in fourth place which for a 24 hour race didn’t mean a lot, but gave us a solid platform to start from. The brit got us off to a pretty good start when first and second place made contact into turn one and went off the track. Simeon was incredibly consistent and at the end of his third stint, he was just behind the leader.

After doing three tanks of fuel on one set of tires, he handed the car over to his fellow countryman in Charlie Summers who continued the great work and keep us out of trouble before Michi Hoyer got in the car his iRacing debut at Burst Esport. The german was just like Charlie and Simeon very consistent in his lap times which saw us staying close to the leader.

The sun over Daytona International Speedway went down the night welcomed our Aussie driver, Griffin Gardiner who jumped in to get the hammer down and after another triple stint, he had caught the leader by 30 seconds. Charlie went back in, going into the morning and with under 9 hours to go, we took the lead of the 24 Hours of Daytona.

What followed was a demonstration in controlling the race, and after a couple of stints by Michi, Simeon brought the Burst Esport car home and the chequered flag to win the 24 Hours of Daytona! A brilliant way to start off 2021, what a month it has been for Burst Esport.

Thank you to our sponsors and partner for their incredible support!