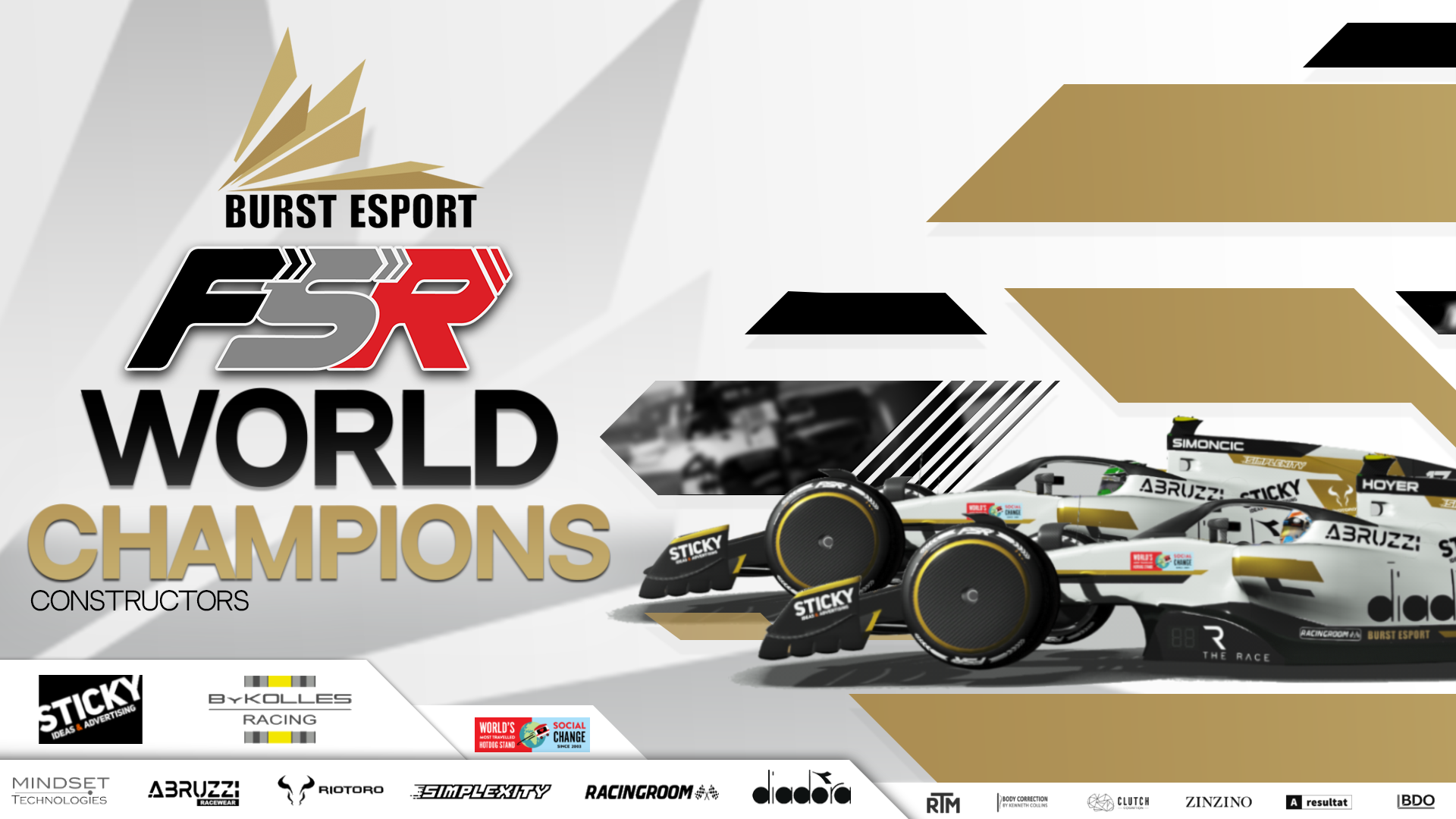 We are happy and proud to confirm that Burst Esport has for a consecutive year secured both the drivers and the constructor’s title! Jernej Simončič has become a 3-time world champion while securing the constructor’s title with Michi Hoyer who’s now has secured that title for the second year in a row! Dawid Mroczek and Robin Pansar finished the season in 7th and 11th place with several top 5 finishes for them both. Michi finishes the season in 3rd place, just shy of Red Bull Racing Esport’s Alex Siebel in 2nd.
With 7 wins of the season’s 11 races, Burst Esport has displayed one of the most dominant seasons to date in FSR history!
rFactor 2 Team Manager and now double constructor’s world champion Michi Hoyer has this to say after securing the title:

“It’s an incredible team effort by everyone on the team to be able to crown ourselves the Constructor World Champions for a 2nd consecutive time and shows that the team is currently operating at its best. This title goes to everyone on the team. Special thanks go out to all our sponsors and for the support and faith, they put in us. We thank Red Bull Racing Esports and BS+Williams as well as all other teams for the fight this year. Also, we are proud that our driver Jernej Simoncic has been crowned FSR Driver World Champion for the 3rd consecutive time.”

And here are the words from, Jernej after becoming the driver’s world champion for a third consecutive year:

“It may look like I became the champion for the third time easily, but actually, for me, the first races of the season were very difficult and I needed some exceptional performances to turn it around. The first win only came at round 5 when something clicked for me, and after that I was finally able to consistently fight for race wins.

I started racing at the highest level of simracing at FSR 10 season ago as I just wanted to compete. 10 seasons later I’m a triple champion and a professional simracer, mostly thanks to everybody who pushed me hard at FSR WC, and to some special people with whom I had the privilege to share the track with, like George Chatzipantelis, who got me into FSR, James Sadler and the GhostSpeed guys, and Michi Hoyer, who persuaded me to join ACR and later to leave ACR to join Burst.”

This achievement is the result of an incredible team effort from all at Burst Esport, and of course, our amazing sponsors and partner, which makes performances like this possible – thanks to them for their faith in us and support!