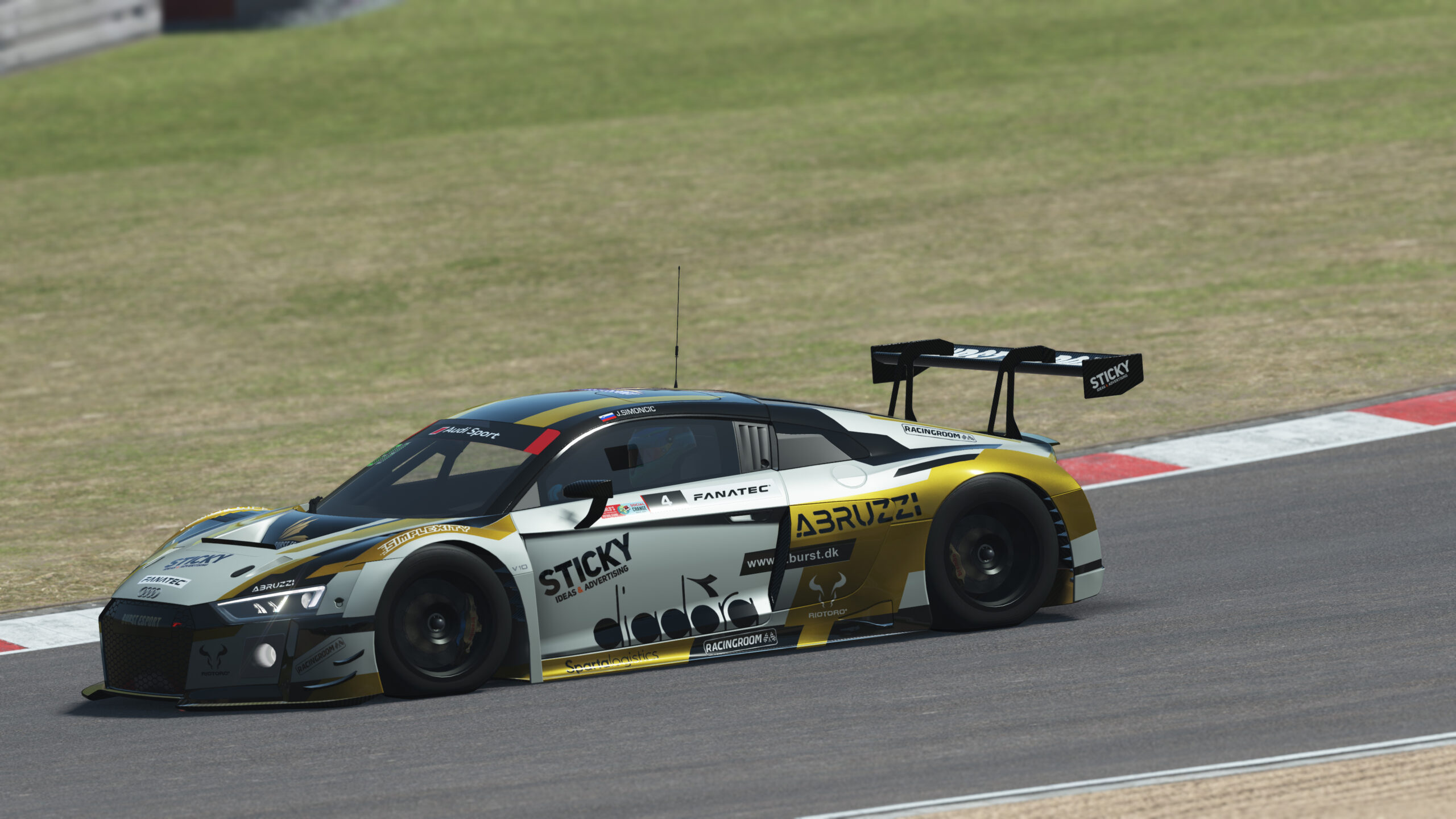 There hasn’t been much news from the GT PRO and GT3 Endurance series for a while, which we are sorry for. But now you can catch up on what has happened in this big GT3 racing catch up.

We start off with a series where we have enjoyed great success with four wins out of the first five races. Round 6 of the series took place at Mount Panorama, also known as Bathurst, and mathematically, Burst Esport had the chance to the champions of GT3 Endurance with 2 rounds still to go.
Jernej Simoncic joined Dawid Mroczek in our Callaway Corvette GT3, and it started off incredibly well with the Polish driver taking pole position.

The race started in the dark which created another level of intensity to the already challenging Mount Panorama circuit. Dawid got off to a great start and was controlling the race from the front. After his first pitstop, he stayed in the lead, but had to concede the position a few laps later, but was able to maintain the gap and therefore still be will in contention for the win once again.

Around the halfway point of the race, the leader made a mistake going down the hill in the midsection of the track, smashing his car into the wall bouncing back onto the track. Dawid was as mentioned very close to him and due to the narrow track with no runoffs, he had no chance of avoiding or slowing down, which also resulted in significant damage to the car. However, he was able to crawl it back to the pit, where after a long time of repair, he got back on track in P22. What followed was a monstrous recovery driver from both him and Jernej, and they managed to drive their way back up to P13 before getting the chequered flag.
Not the race we had hope for, but with still a nice gap to 2nd in the standings, we the chance to seal the title on the 24th of April for the 3 hours of Suzuka.

The GT PRO series by rFactor 2, got its third season underway back in early March, with a total of three Burst cars on the grid. Jernej Simoncic and Michi Hoyer returned with an Audi R8 LMS while our new signing of Dennis Jordan lined up in a Bentley Continental GT3.
Round 1 took place at Imola where after a very competitive qualifying session, we had all cars inside the top 11. Imola was a difficult track to overtake at, so finished almost where we started, but as for previous seasons, the top 10 would get reversed for the feature race.
Here Dennis Jordan showed his class and secured a great podium place in his debut event as a Burst Esport driver. Michi was involved in an incident that cost him a potential top 5 finish and ended the race in P13. Jernej came home in 11th again.

Round 2 were at Circuit Spa Francorchamps. Michi Hoyer and Jernej SImoncic secured a Burst Esport front row lockout in qualifying with Dennis not far behind in 4th. A dominant drive from Michi saw him leading from start to finish to claim his maiden GT PRO race win with Jernej and Dennis finishing in 3rd and 5th place.
For the feature race, Michi got spun in turn one, which sent him to the back of the field, but he put in a remarkable drive and recovered to 16th place.
For Dennis Jordan, it was a much smoother event with the German taking another 5th place finish while Jernej came home in 7th.

Finally, we got to the third round, this time at Silverstone where Jernej converted a starting position in 4th to a podium finish with Michi and Dennis crossing the line in 6th and 12th.
The feature race, however, saw Dennis put in a nice drive from outside to the 10 to finish in P7, just after Jernej and Michi.

All of this means that Jernej Simoncic is leading the GT PRO series with Dennis and Michi in 5th and 6th before round 4 at the Nürburing takes place on the 19th of April.